All guides available to get up and running with & fully understanding Ilnox.

Quick and simple guides for getting started with Events, Smart Channels and Rich Messages.

Getting started with Ilnox. Covers everything you need to be ready to enable additional features.

Quick and simple guides for getting started with Events, Smart Channels and Rich Messages.

Done! You may now start creating events via /events create!

Should you encounter any bugs, glitches, or require assistance, please reach out in our Discord server🔧

Getting started with Ilnox is easy. To start, we need to invite Ilnox to your server and, to do that, log in via discord and press the "Add to server" button.

After inviting, we highly recommend configuring these settings using the /configure command before using any other features.

Congratulations!🎉 Ilnox is now fully functional within your server! You may configure more settings of Ilnox to change color and icon or reconfigure these settings at any time using the /configure command.

Events are creatable using the /events create command, upon running, Ilnox will ask you for the following information:

Once all information has been provided, Ilnox will create the event in the specified channel and automatically sign you up for it. Other users of the server may now join and leave the event whenever they please.

Upon execution, both commands will provide you lists of events that you can access within the used guild. 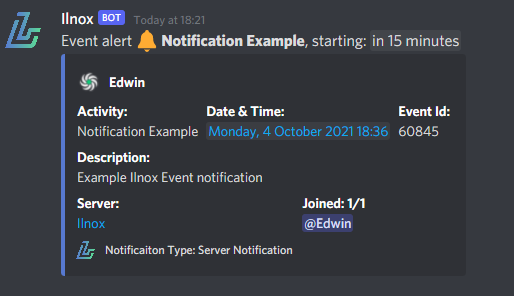 By default, Ilnox will alert all participants of an event 15 minutes before the scheduled time, this behavior can be changed using the /configure command to fire the notification earlier or later.

Events Channels is an optional feature enabling administrators to restrict where events can be posted. Configuration can be done using: /events channels configure which will prompt you to specify which channel you would like to configure and if there should be a role restriction to post in it.

Tip: Event channels are automatically verified occasionally ensuring their existence. If an events channel happens to be deleted it will be automatically removed from available Events Channels. 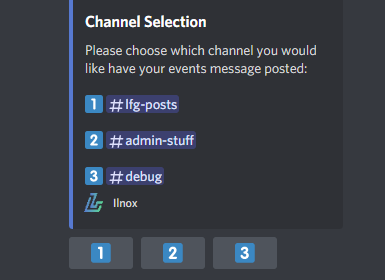 If multiple events channels are available to a user, they will have an option to choose during events creation. 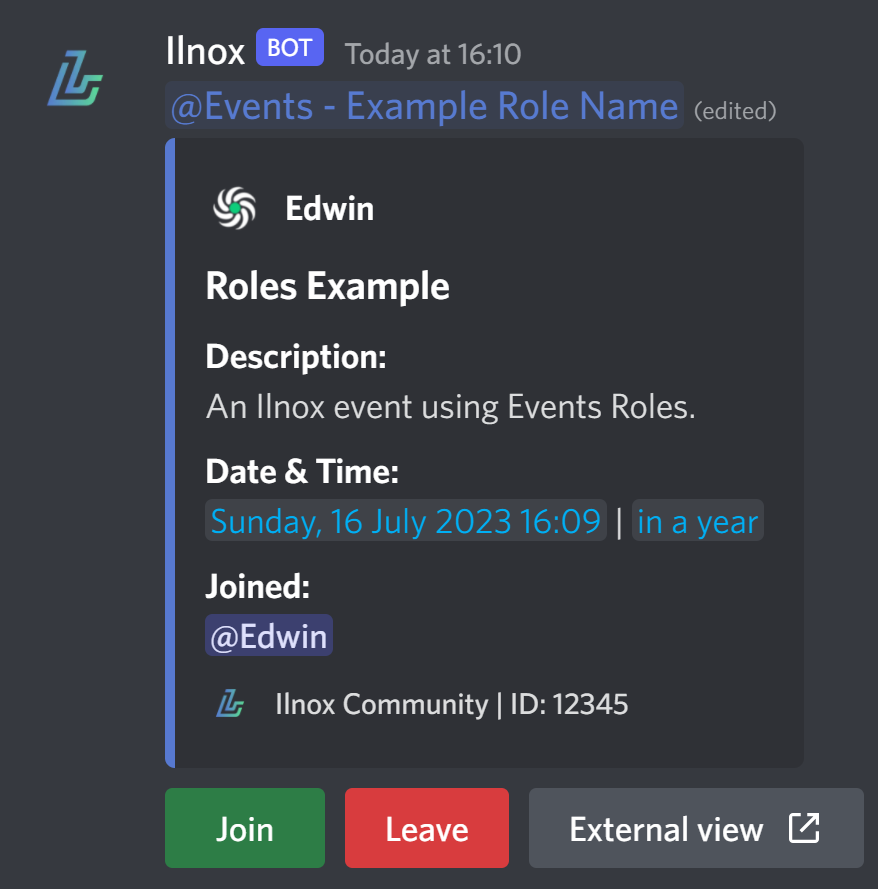 Events Roles is an optional feature allowing events creators to attach customizable roles to their events. Roles will exist for the duration of each events existence and will be automatically assigned to the events participants.

Events Roles are only available to administrators (defined per /configure) by default, you may permit all events creators to attach roles to their events via the "Events Roles" setting available under /configure 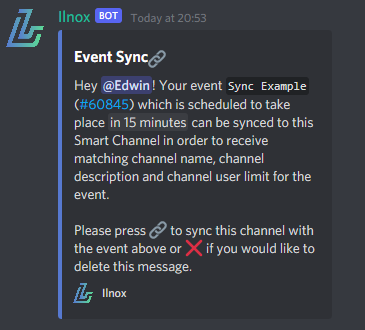 Upon creation of a Smart Channel, Ilnox will check if the channel creator has scheduled any events for the upcoming, or past 15 minutes. If this happens to be the case the event creator will be offered to sync the Smart Channel to the event to receive matching channel name, channel description, and channel user limit for the event.

Smart Channels customization must be enabled via /configure to allow usage of Ilnox's Events Integration.

Congratulations!🎉 You have now mastered the art of Ilnox Events, happy scheduling! 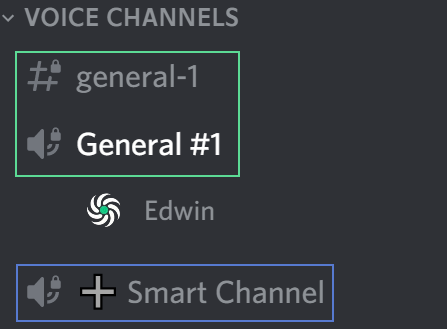 Template Channels are creatable using the /sc create command, upon running, will Ilnox ask you for a naming scheme for its Smart Channels. You may dynamically name the template channel's Smart Channels by including naming variables.

You may change the naming scheme for a Template Smart Channel by running /sc edit while being connected to any of its Smart Channels.

Smart Channels Variable Manipulation allows you to alter naming variables outputting behavior and/or format. You can for example reverse the variables output order, randomize it's selection and/or make the output uppercase.

During the initial setup of Template Smart Channels, you may select if you would like its Smart Channels to appear above or below itself. 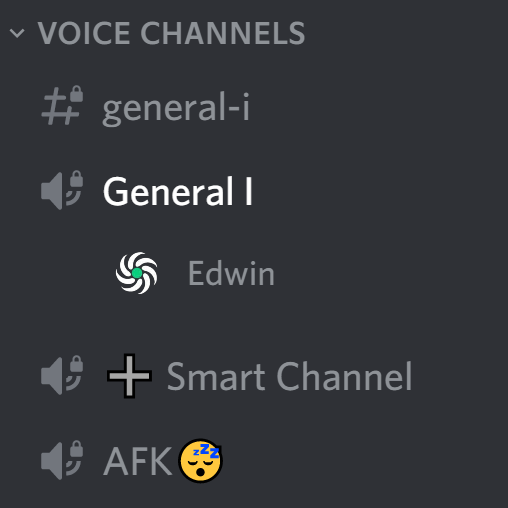 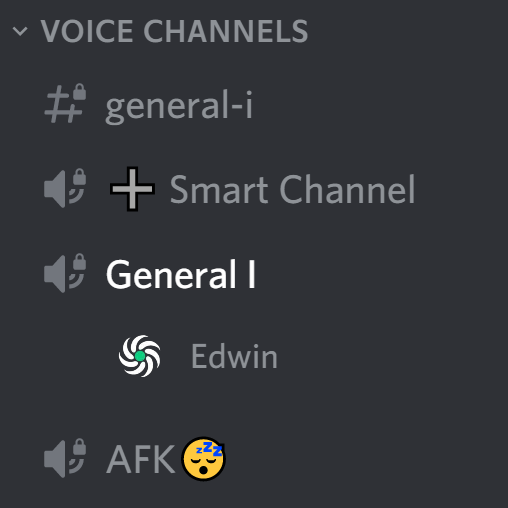 You may change the placement setting for a Template Smart Channel by running /sc edit while being connected to any of its Smart Channels.

Static Channels may be created using the /sc create command. Static Smart Channels operates and provides the same functionalities as a Smart Channel created by a Template Smart Channel would except that they won't be deleted automatically.

Ownership of a Smart Channel may be manually transferred by administrators or the Smart Channel owner using /sc owner [new_owner].

Connected administrators (and the channel owner, depending on the server's configuration) may additionally choose to ban (and unban) users from their Smart Channel via /sc ban and /sc unban respectively. A banned user will be denied connect permission on the channel.

Native text channels are accessible by everyone with connect permission on the voice channels, regardless if they're connected to the Smart Channel or not. This behaivor can not be changed due to Discord limitations. 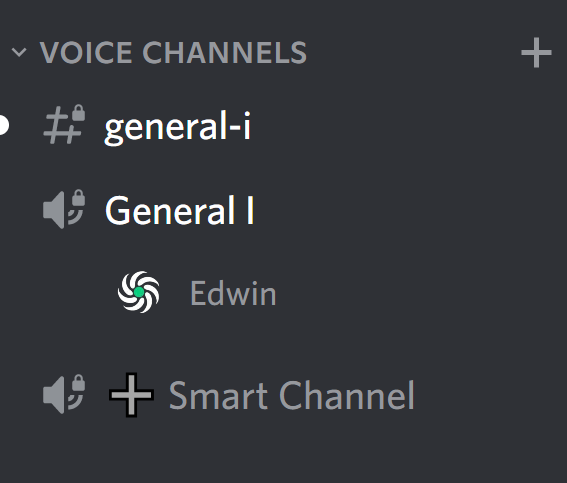 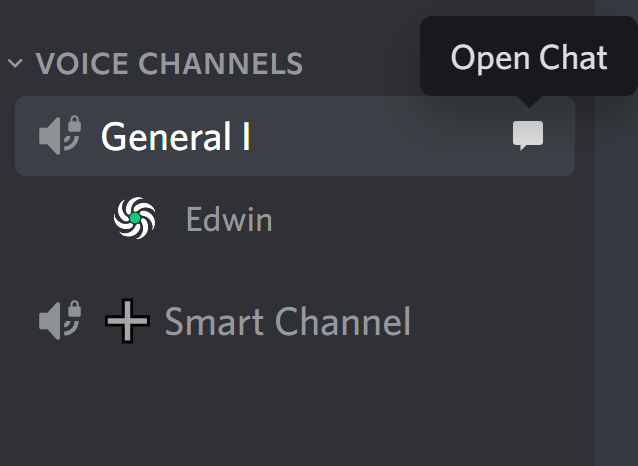 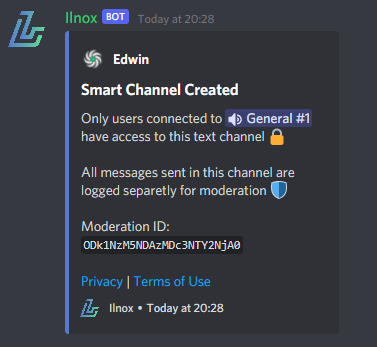 Once Smart Channel logging has been configured, created Smart Channels will be provided a Moderation ID and users will be informed that messages are being logged. 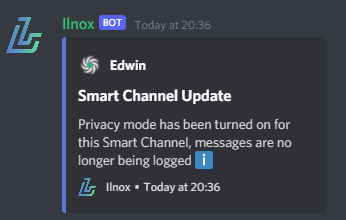